Boomers vs. Kids: Federal Spending on Children Is Falling

“The future depends on what we do in the present,” Mahatma Gandhi once said (at least according to the Internet). If so, a new report suggests we’re headed for some trouble, as the federal government is spending a small and declining share of its budget on children.

After growing significantly from 1960 to 2010, government spending on children has been declining since then. As of 2016, it accounted for less than 10 percent of federal spending and tax breaks and is projected to keep falling, according to the new analysis by the Committee for a Responsible Federal Budget. 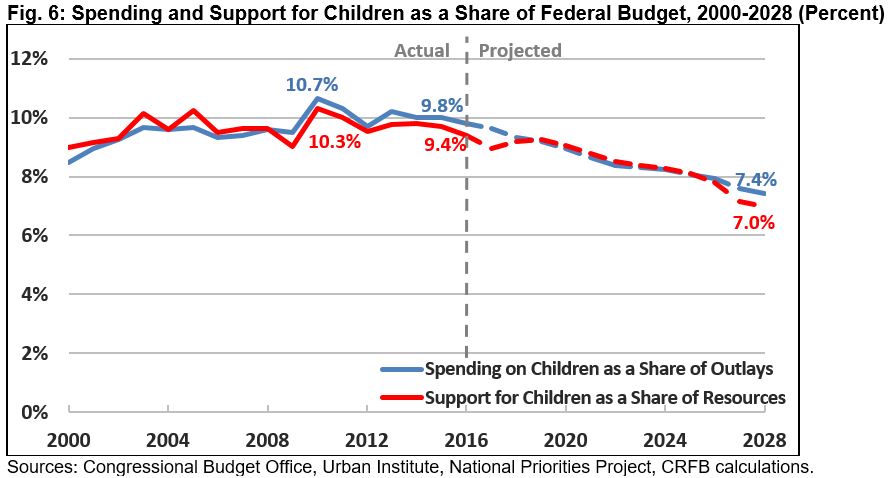 By 2020, the report says, the government will be paying more in interest on the national debt than it spends on children, a development it calls “economically and generationally backwards.” By about 2030, the government could be spending twice as much on servicing its debt as it does on children.

“Generationally, it is unfair to burden younger Americans with the costs of tax cuts and spending enjoyed by prior generations, while leaving them fewer tools and skills to pay these costs,” the report says.

The report, which relied on data from the Urban Institute’s Kids’ Share project, points to a number of factors for the decline in spending on kids. The 2010 peak in spending was the result of a one-time spike driven by the post-financial crisis stimulus package. “More fundamentally, the retirement of the Baby Boom population and rise of health care costs means that a larger share of federal spending is going toward the elderly,” the authors write, noting that while less than a tenth of federal spending in 2016 went toward kids, more than a third was spent on older Americans.